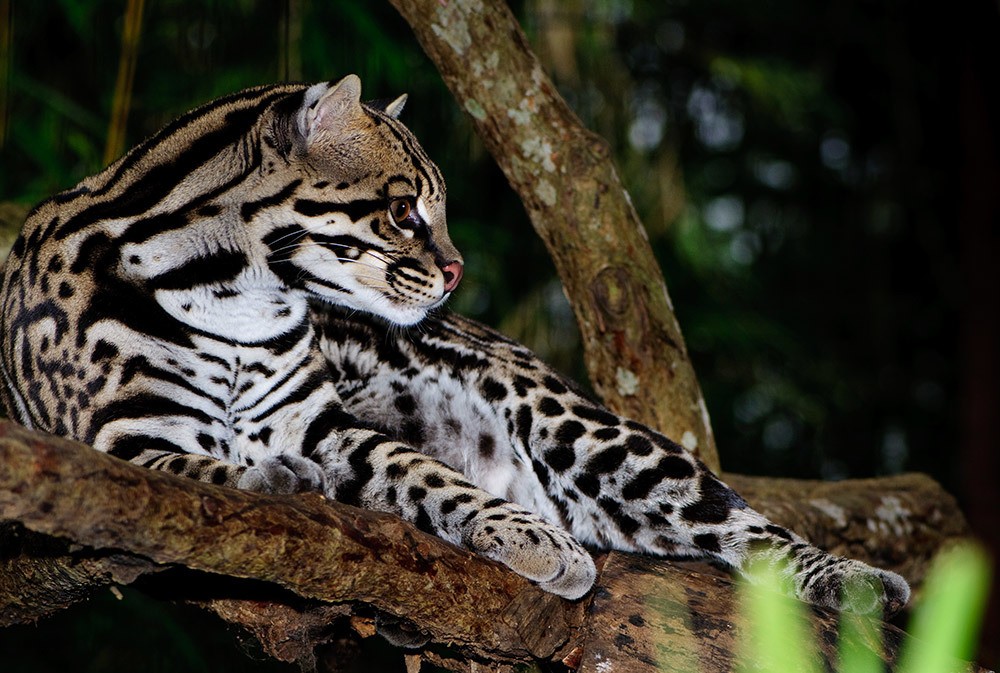 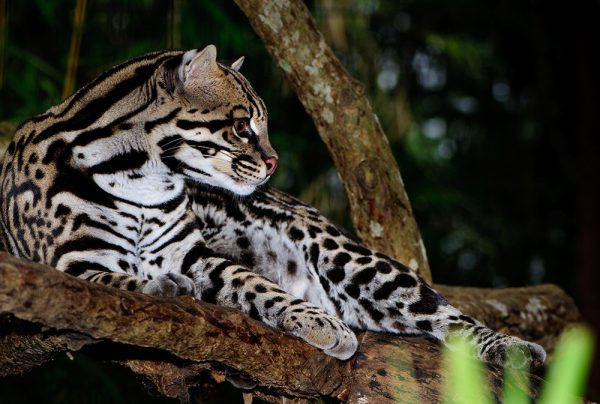 Location: Most of South America (except Chile), southern United States

Twice the size of a housecat, each Ocelot’s coat has a unique pattern (like a fingerprint).

These beautiful American wildcats are sometimes referred to as dwarf leopards.

Twice the size of a housecat, each Ocelot’s coat has a unique pattern (like a fingerprint).

These beautiful American wildcats are sometimes referred to as dwarf leopards.

A small wildcat with a beautifully distinctive coat

Living deep in the forests and woods of South American and the Southern United States is the Ocelot, a small wildcat with a distinctive, patterned coat. Its coat helps to camouflage it while it hunts in the forest, as well as keep it safe during the day while it sleeps. It’s about twice as large as a house cat; it can weigh up to 40 pounds and get as tall as a man’s knee.

Ocelots are nocturnal, which means—like black footed ferrets and bats—they are awake at night and sleep during the day. They have extremely good eyesight and hearing, which helps them navigate in the dark while they hunt. Plus, like most cats, they can pad softly on the ground or in trees and make no noise. When they do sleep, ocelots prefer to find a hollow tree, a high, safe branch or some dense brush to curl up.

Ocelots are well-known for their beautiful coats, which can have stripes and spots and are unique to each animal, just like our fingerprints. They have dark spots on their cheeks, and their tails sport rings of darker fur (like a raccoon). Their tails are also notable because they are half the length of their bodies, and they use those long tails to balance as they climb trees and branches.

A few years ago, ocelots were a threatened species, but their numbers are growing. However, this process is a little slower because female ocelots only have one litter of one to three kittens every other year.

Ocelot kittens are born blind and with dark fur, but will open their eyes after about two weeks. They’ll gradually begin to develop a unique pattern in their fur, and will stay around the mother’s territory for up to two years. They’ll take this time to learn to hunt, then they will establish their own territory.