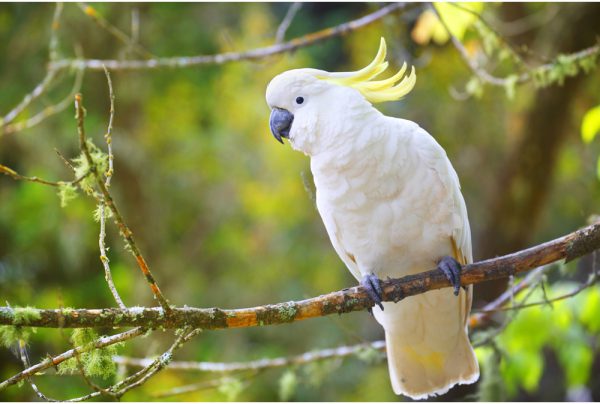 The sulphur crested cockatoo can live up to 70 years in captivity.

These birds produce a very fine powder to waterproof themselves instead of oil as many other creatures do.

The sulphur crested cockatoo can live up to 70 years in captivity.

These birds produce a very fine powder to waterproof themselves instead of oil as many other creatures do.

The sulphur crested cockatoo is a white parrot which has distinctive sulphur colored crest, dark grey bill and a yellow wash on the underside of its wings. It is found in timber lands and also in urban areas. These birds live in large groups often numbering a hundred – and since this cockatoo has a loud screech, these groups can be very noisy indeed! The sulphur crested cockatoo prefers to roost in leafy trees during the day, and makes its nest in the branches of eucalyptus trees. These birds are extremely intelligent and very curious. They learn to talk quickly and are good mimics, which makes them very popular as pets.

The sulphur crested cockatoo is as big as a large parrot – between a foot and two feet in length. It is a seed and grain eating bird that loves all types of seeds, nuts, fruit flowers, berries and it sometimes even eats small insects.

Sulphur crested cockatoo are not endangered at all. Rather, they are so numerous that many farmers consider them as nuisance. This is because they sometimes destroy crops of fruit and cereal, as well as the timber on the outside of houses. However due to recent overhunting by humans, they are now a protected species under the Australian Commonwealth Law.